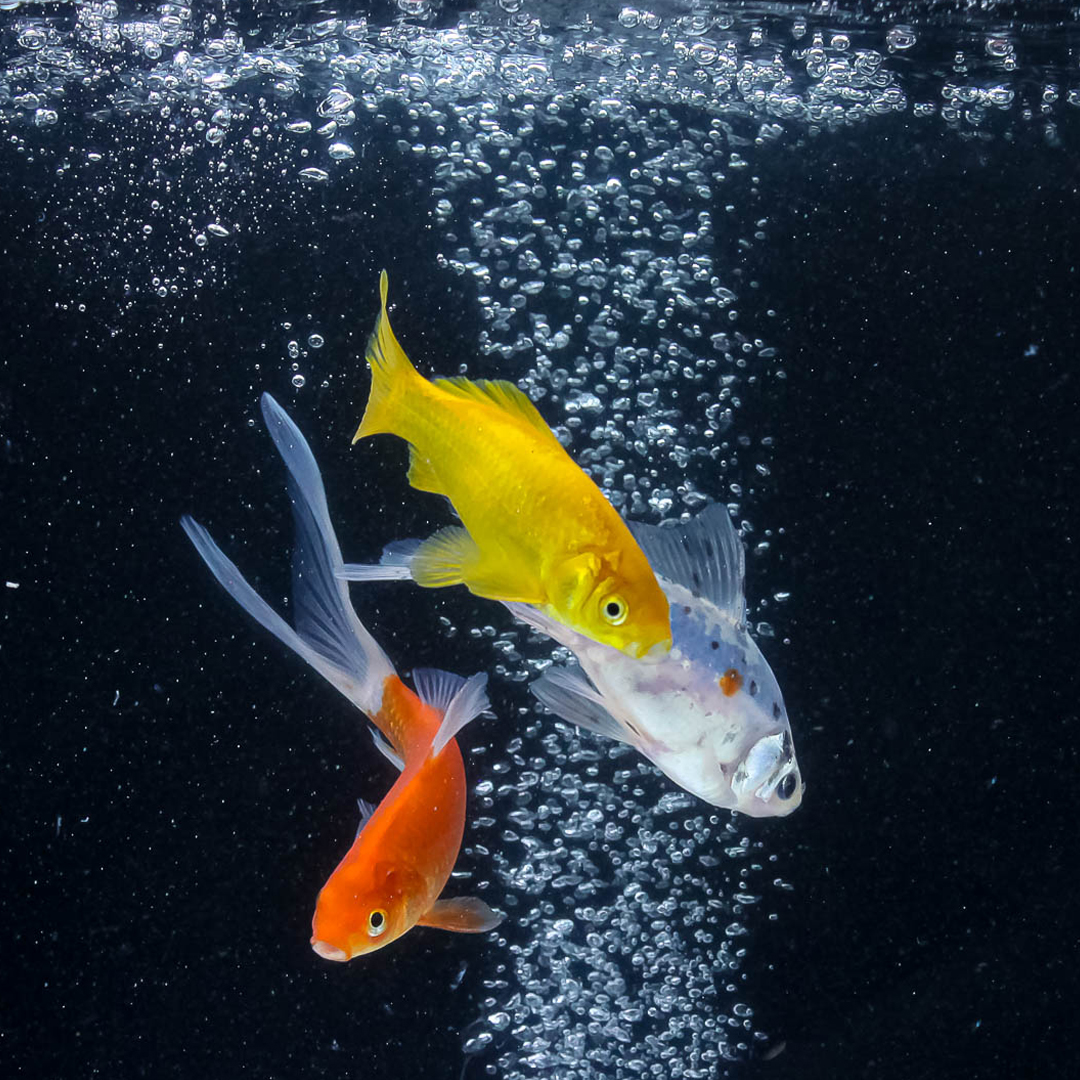 Koi and goldfish are both popular choices for backyard ponds. The two species have a lot in common, making them great pond mates. Though many commonalities exist between koi and goldfish, they differ in several ways including shape, size, coloring, lifespan, and cost. Knowing the difference between the two can help you determine whether koi, goldfish, or both are best for your pond.

While koi and goldfish are distinct species, they share an ancestor in the carp. Early carp breeding programs originated in 600s China during the Tsang dynasty, and over time developed a number of varieties.

The specific lineage of koi is somewhat uncertain. Until recently, experts believed that koi came from the common carp. But newer records suggest that koi were developed in Japan during the 1800s through selective breeding of the amur carp. In just 200 years breeders developed a staggering number of variations, which are separated into 13 basic classes with subtypes depending on pattern and color differences.

Goldfish are older than koi, dating back more than 1,000 years. They are descendants of the Prussian carp, which were drab, olive-green fish primarily used as feeders. Pond owners occasionally noticed that some fish would develop unusual orange and yellow markings. They separated these from the rest of the feeders, and bred them as pets. Over time, the mutations produced the colorful Carassius auratus, which we now know as goldfish. Roughly 200 recognized goldfish breeds exist.

One of the biggest physical differences between koi and goldfish is their size. The average koi is between 20 and 25 inches long, with the potential to grow longer than four feet. Goldfish are much smaller and usually only grow four to six inches, though given proper space and living conditions can reach 12 inches in length.

Koi breeders have historically focused on developing their color lines, while breeders of goldfish concentrated more on body type. If you want to gather a number of fish each with unique appearances, koi will offer an artistic palette of colors and patterns. Goldfish will provide geometric variation with many available body shapes, as well as fin types, eye configurations, and tail lengths.

The number of koi colors and patterns can seem limitless. There’s a near rainbow and more in the red, orange, yellow, green, blue, brown, black, white, gray, silver and gold colors that are possible to spot across koi varieties. Koi also have a variety of scale patterns, while goldfish scale patterns are either metallic, nacreous, or matte.

Body contour is uniform for koi but differs among goldfish varieties. Koi have an elongated, torpedo-shaped body similar to their carp ancestors, with a downward-facing mouth that makes foraging easier. Goldfish body shapes are usually wider and rounder than those of koi. Some goldfish have bulging eyes, while no type of koi has that trait. Koi have whisker-like features called barbels, while goldfish do not. Goldfish have front-facing mouths with a rounded under jaw.

The fins and tail are also more simplistic on koi, while goldfish have a variety of fin and tail types. Like the carp, koi have a connected dorsal fin and tail. Goldfish have two sets of paired fins, and three sets of single fins. They can be single-tailed or double-tailed. The only koi with comparable traits is the butterfly variety. This koi has long, flowing fins in an array of colors and patterns.

Koi and goldfish varieties suitable for ponds are the most popular backyard pets because they can thrive in a wide range of temperatures. Koi and pond goldfish share the same water condition needs and adapt similarly to weather. Both produce a lot of waste and require an environment with a high-quality filtration system. While they tolerate fluctuations in pH levels better than other fish, it is still important to keep levels between roughly 7.4 and 8.4.

A koi pond should contain at least 1,000 gallons of water with 200 gallons of water per each additional fish. If your pond is less than 1,000 gallons, goldfish would be a better option. A koi pond needs to be at least three feet deep, but potentially much deeper depending on the weather. If you live in a cold climate, depths of six feet or more might be necessary to prevent the pond from freezing. The criteria are similar for goldfish, with a minimum depth of two feet and possible depths of up to five feet needed.

Koi and goldfish are both omnivorous, meaning their healthy diet consists of both plant and insect/animal matter. They have teeth in their throat areas, and can use them to crunch on hard material including the pellets that are the staple of their diets (smaller goldfish often eat just flakes). The spectrum of palatable foods is similar for both species, though goldfish are limited by their smaller mouth sizes.

Both koi fish and goldfish reach maturity when they are two to three years old. However, a koi will live to a much riper age than its goldfish cousin. The average lifespan of koi ranges from 25 to 35 years, while the span for goldfish is five to 10. In both cases, this varies based on pond conditions and the nutritional balance they receive. The oldest known koi is said to have lived for 226 years, whereas the oldest known goldfish lived for 43.

Another point of difference between koi and goldfish exists in their price point. The price of a koi can stretch from as little as $10 to upward of $20,000 depending on its variety, size, color, pattern, and lineage. Most goldfish typically cost less than $100.

Koi and goldfish are non-aggressive breeds, and they typically work well as aquatic companions. However, both will eat fish that are much smaller than them. For example, comet goldfish make great pond mates for koi, but the ones found at major pet store chains are typically less than one inch long and can easily be mistaken for a snack. Professionally-bred mature pond goldfish should have no problems coexisting with koi and can add appeal to the pond aesthetic.

Are you ready to add a new fish to your pond? Shop our full selection of koi and pond goldfish today.